A summary of my ayahuasca ceremony experience 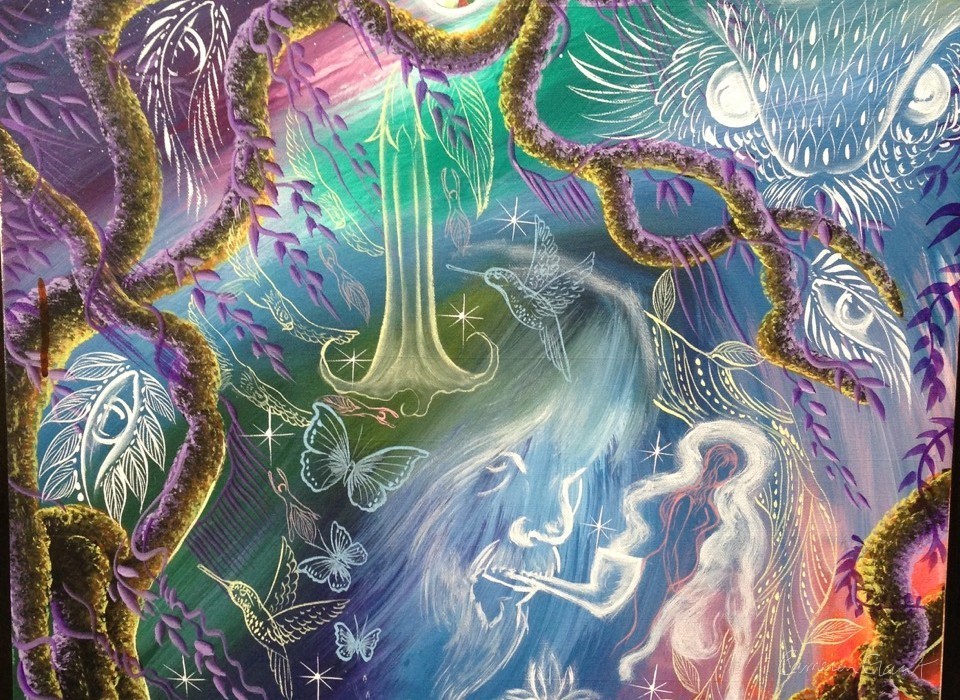 This is not a complete report of my experience, that will come later as a transcribe my written journal entries. But this is a summary of my first two weeks at the Temple.

To get here from the airport, we had to take a 30 minute bus ride to a spot on the river, where we had to load a big group of us onto a long motorized canoe with a thatched palm roof. The boat ride was only about 20 minutes of cruising down the amazon river. Then we unloaded onto a muddy bank to be greeted by a crew of locals whose job it is to carry all of our gear by foot for 3.5 miles. I felt bad letting people take my gear for me, but they are being paid well to do it, so I didn’t feel TOO bad. The trail was kind of strenuous due to the heat, but so beautiful. Because the rainy season hasn’t quite started yet, the path was pretty dry. I didn’t really need the boots I brought. In fact, since I got here, I haven’t really worn shoes at all.

When we finally arrived, we were greeted by a group of female shamans, or “maestras”. They are ayahuasca curanderos who would be at the ceremonies nightly. I was really impressed by the beauty of the entrance to the temple, with its colorful tropical flowers, fruit trees, and medicinal herbs. The first structure I saw was a big circular thatched roof hut called a Maloka — kind of like an open-air hardwood floor circular yurt enclosed by mesh screen. This is where the 12-day retreat group would conduct their ceremonies. As a volunteer, I would be spending more time at the second maloka up the hill. I would be staying with the deep immersion people who are also here for a month or more, but they don’t do any work trades.

What’s cool about the second center is that there is a large rectangular building built in the same style as the malokas, but this one is the largest structure on the property — housing a kitchen, bedrooms, two dining areas, and various hammocks and benches to hang out on. Most people in the deep immersion program hang out here for most of the day. Talking, reading, drawing, writing, or meditating. It’s nice to be able to have quet time by myself or social time with lots of other people. Usually there are 10-20 people hanging out at center 2. I’m actually glad that my room is separate from this building because sometimes I do get exhausted mentally from all the chatter. My room is a 2 minute walk up a hill in another structure that houses three rooms. Each room has a bed, a bookshelf, a desk, and a hammock on a porch. None of the buildings here are fully contained by closed walls. They all have mesh screens to keep out bugs, but it’s so warm here, there is no need for insulation. Also, we have bug nets surrounding the beds to avoid getting bit by insects during the night.

Anyway, after a few nights of getting excited to do ayahuasca, we finally prepared for our first ceremony. The scene was set by a rainy thunderstorm complete with bright flashes of lightning. We did some yoga in the maloka and then after a couple hours, our maestro and maestra entered, saying “buenas noches”. They didn’t speak any english, so there is not a lot of verbal interaction between the “pasajeros” (passengers) and maestros. After a bit of down time while nearly everyone smoked mapacho (jungle tobacco that has healing and energy clearing properties), we began to drink the ayahuasca one by one in front of the maestra. It tasted terrible, like fermented sour bitter juice. I had to rinse my mouth out, it was pretty nasty. Then I layed down on my mat as they turned off the lantern and we waited in dark silence.

The darkness was interrupted by the occasional spark of a lighter as people lit their mapacho cigarettes. The ayahuasca come-up is gradual, taking about an hour or so for the full effects to kick in. First, after 15 minutes, I felt a tingling, buzzing sensation building in my body, and my imagination was filling with spinnig, quickly changing patterns, fractals and colored lights. I felt a heavy “pressing” sensation like I was wearing a heavy face mask. I started hearing strange tones and sounds, and feeling like sudden bursts of electricity were shooting past me or through me.

Then the shamans began to sing their other-worldy icaros, their healing songs that they learn from the plant spirits while under the influence of the medicine. After 10 minutes or so, they began to circulate around the maloka, singing to us one by one. Then the maestra arrived to my mat. I sat up out of respect. Sitting up made me feel nauseous. It is said that when they sing to you, they pull negative energy or illnesses out of you. This comes in several forms of purging. Many people vomit, but I didn’t. I just yawned a lot, which is another form of purging.

After they sang to me, I laid back down and got really deep into a trance, like a very deep meditation. I had so many thoughts racing around, not in a bad way, just many things to ponder. And then I would feel like there was a feminine presence with me. Not a being that was talking to me per se, like many others have experienced, but just a vague idea that someone was near me, healing me and taking care of me. I came away from that ceremony with a few insights, and the following ceremonies, more insights were revealed and solidified.

I felt like many of the beliefs that I’ve held for a long time were confirmed experientially. For example, I have long believed that “you are not your body”, and I definitely felt that when at one point I saw myself laying on the mat, and I realized it was me. I really did get outside of myself! It was a crazy sensation. And I just had this deep knowing that I am a consciousness that has experienced many lives, and this is just my latest incarnation.

Although I didn’t get to witness any past lives like my friend Natalie did, I did get the sense that they were there. People say that the medicine reveals what you need to see when you’re ready to see it. And this is one of the reasons that I feel like I will continue to get more out of the ceremonies as time goes on and I am able to participate in more ceremonies.