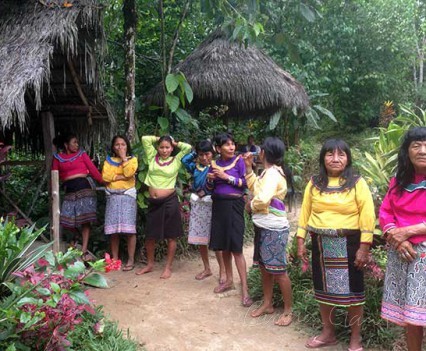 The Shipibo healers greet us as we arrive

After 3 long flights, I finally made it to Iquitos, Peru. The first sensation that hit me as I stepped onto the tarmac at this little airport was the heat and humidity. I was totally overdressed (still dressed for Portland fall weather), and sweating up a storm. I looked out past the asphalt and saw something you would only see at an airport in the Amazon jungle – a broken and decrepit abandoned 747, green with algae or moss, falling apart at the seams. Other planes abound – big cargo jets, helicopters, and Peruvian airlines planes with a spiral vine-like logo. Yes, I finally made it to the jungle. I’ve been dreaming about a place like this since I was a child (Romancing the Stone was a movie that captured my imagination for a long time, set in Columbia, I always wanted to go to Columbia)

After passing through customs in an open-air airport terminal, my fears of being stopped for having a one-way ticket faded. I told customs my plan of staying 3 months, which is the duration of the volunteer program I signed up for.

Being mobbed by taxi drivers is the first thing that happens as you step outside the airport doors. Luckily, I had met another participant of the workshop on the plane (I was assigned a seat right next to him), and he already had a ride arranged to the hotel. Once we arrived at the hotel, I was thankful to have a cold shower and to change into shorts and sandals. The weather here is too hot to wear anything else.

Walking out onto the street, we decided we wanted to see a market. But before we could even step onto a moto taxi, we were being approached and harassed by several street vendors. They come up to you saying, quite inauthentically, “hello my friend,” before proceeding to try to sell you necklaces, bracelets, crystals, carvings, and more. I really didn’t want to buy anything, but these guys are persistant. You can say no 10 times and they still won’t leave. Sometimes they’ll even follow you, pressuring you over and over, trying to make you give in. It got quite frustrating. I told them, “I’m not here to buy anything. No quiero comprar nada!”

Moto-taxis dominate the landscape. Also known as tuk-tuks, these are the vehicle of choice in Iquitos, for they are easier to transport into town (there are no roads into Iquitos, cars must be brought in by boat). Traffic doesn’t follow many rules. People walk in the middle of the street as vehicles swerve around them, just barely missing them. Motorcycles ride inches from each other, cramming as many into the narrow streets as possible.

After walking through the city with a few fellow workshop attendees, I was getting exhausted by the persistent locals trying to sell me things. I had no interest in their overpriced trinkets. So, I went back to the hotel, where I knew they weren’t allowed to chase me around. At least there I could sit in peace. I was so ready to get out of the city. Feeling sweaty from the humidity, I took a shower and then jumped in the pool for a swim. After getting out of the pool, I met another workshop attendee named Jemma, and we talked for about our intentions for coming here.

The next day, I ate breakfast at the hotel, trying my best to avoid eating salt, which meant turning down some tasty looking tamales and rice. Instead, I had fruit and hard boiled eggs with hot tea. As more and more of us arrived in the hotel lobby, I was beginning to see how large of a crowd we really were. There were probably 30 people gathered, waiting for our bus to arrive. Our facilitator, Nicole, was milling about the crowd, checking off names from a list, finding out who owed what and what was owed back to us. Finally the bus was ready, and I tried to get on as quickly as possible to avoid all the people trying to sell me things.

Getting on the bus, I took the first seat available, next to a swiss girl named Sarah. Her english was impeccable, and her spanish was probably the same as mine: pretty basic. We talked for most of the ride about all sorts of things. She told me about her previous experience at the temple in May, saying that she was ready for a longer immersion. She would be staying for 2 months. It was promising to see that she was coming back for a second trip to the temple. I felt like I was going to the right ayahuasca center. The bus ride was about an hour long. We drove through shanties and slums, past garbage-filled, pothole-ridden dirt roads, breathing in the toxic diesel fumes from cars that wouldn’t pass any environmental inspection in the states. It reminded me of my travels in Central America. Not too different, really. Finally, we arrived at the end of a road, and transferred to a couple of very long, thin wooden boats with palm-frond roofs. The boat ride was only 20 minutes, and our conversations revolved around DMT and reasons for coming.

When we pulled up to the shore, there was a team of 20 or so locals waiting for us. They worked for the temple and they were here to carry in our luggage. As the baggage was dropped off, I had a hard time deciding if I wanted to tell the people who had my bags, “yo quiero llevar mis bolsas” In the end, after much contemplation, I decided to let them carry my bags. It was their job, after all, and they were being paid to do this. Still though, I felt guilty letting a woman 3/4ths my size carry my backpack. Not to mention, there was part of me that was worried about my laptop. I knew I should just trust that everything would be OK, but after several experiences of losing baggage during travels abroad, and having things stolen, I guess I am tainted and have lost a bit of trust in the process.

The walk into the jungle took an hour, it was probably 3 or 4 miles of trekking past lush green tropical jungle plants. The scenery was beautiful, albeit hot and humid. It was really beginning to sink in – I was in the amazon rainforest, on my way to a place I wouldn’t leave for 3 months. I began to wonder if I had adequately prepared. Before leaving, I had been so busy rushing a project to the finish line that I ended up not really thinking through what I would want for 3 months. I tried not to worry much though, and just enjoyed walking in silence amongst the locals carrying all of our luggage.

Arriving to the temple, we passed through a palm-frond roofed gateway, welcomed lovingly by the maestras (healers from the Shipibo lineage). I felt a good energy here already, and was relieved to finally be done with my journey. I was shown my tambo (dwelling hut), lucky #7, and I layed out in my own personal hammock, taking in the myriad sounds of the jungle. It was great to finally be done with travelling for a while. I looked forward to what experiences would come next in the workshop. To be continued…